I Am My Own Wife (London) 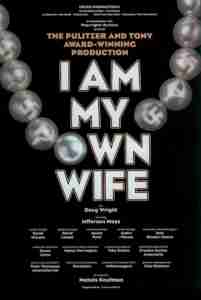 I Am My Own Wife (West End)

Doug Wright’s Pulitzer Prize-winning one-man play I AM MY OWN WIFE, transferring from Broadway, opened at the Duke of York’s Theatre, London West End for a limited engagement to open November 10, 2005 and closed on December 10, 2005, with a run of 36 performances and 6 paid previews (previews began on November 4, 2005).

Jefferson Mays played 35 different characters, including the play’s creator Doug Wright, who travels to Berlin to interview Charlotte von Mahlsdorf, a transvestite who has survived the oppressive regimes of both the Nazis and the Communists. 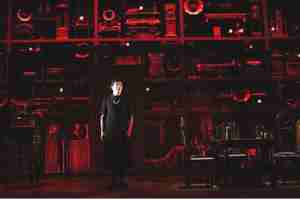 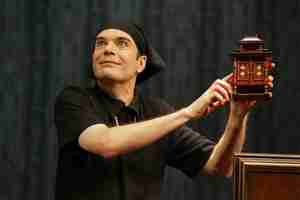 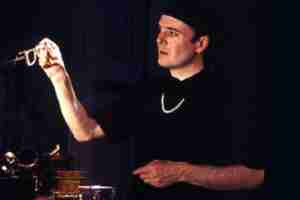 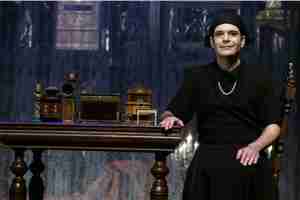 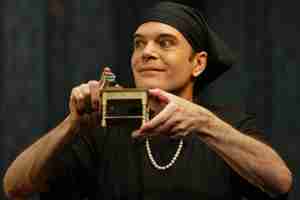 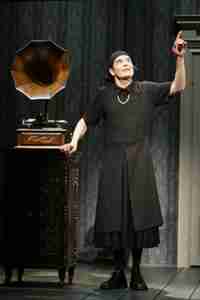 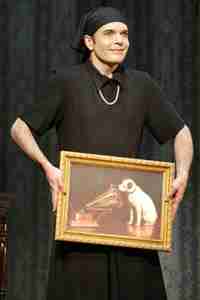 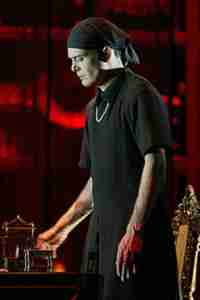 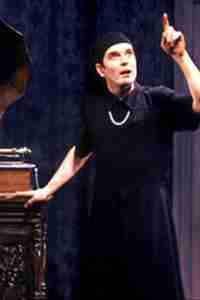 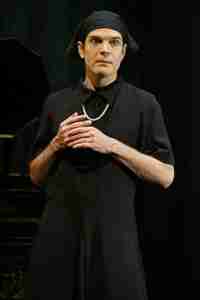 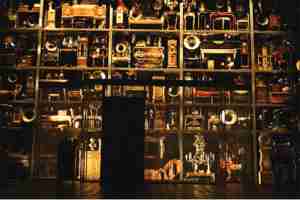 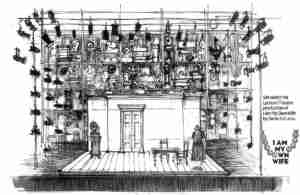 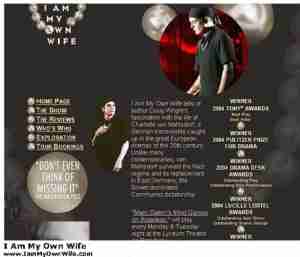 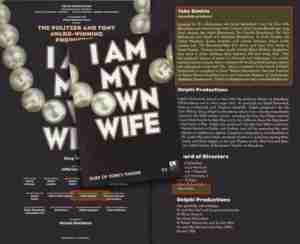 Prior to London, I Am My Own Wife played on Broadway, then a limited US tour.  Following London, a production was mounted at the Melbourne Theatre Company in Australia. 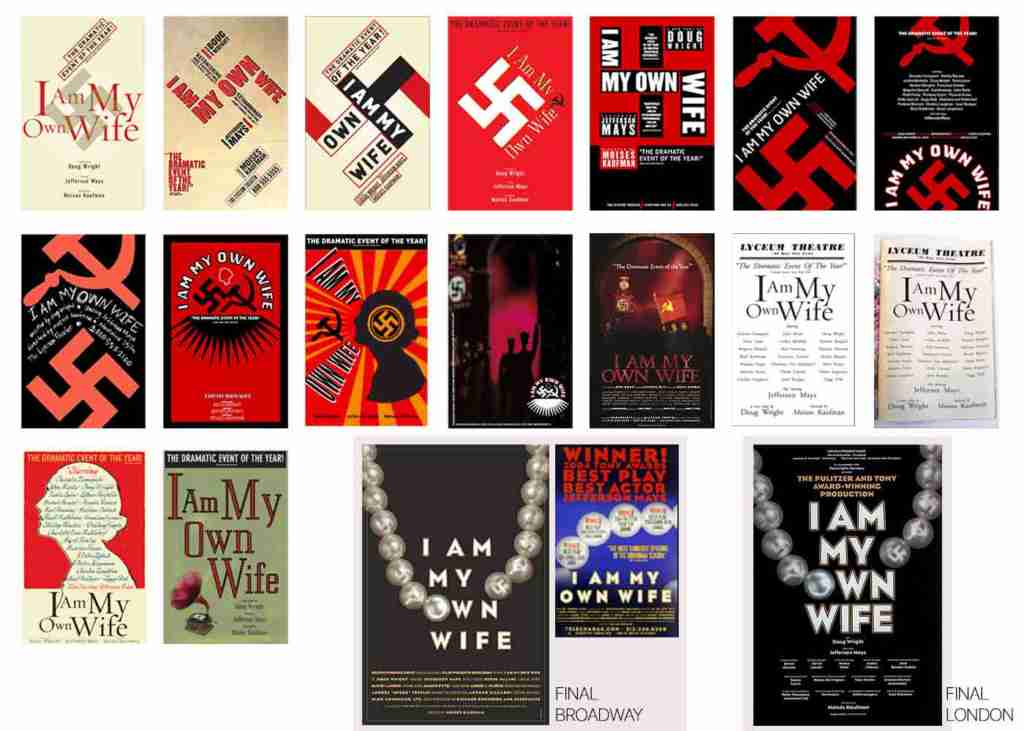 I Am My Own Wife opens in silence. Charlotte stares out at the audience, smiles slightly, and then disappears. The stage is empty for a short time before Charlotte reappears. She carries a large antique Edison phonograph, sets it down, admires it, and finally speaks. She proceeds to lecture the audience on the topic of the phonograph, giving a history of how it was developed and how it works.

Charlotte becomes quiet again; this time, when she speaks, she has been transformed into John Marks, the bureau chief of the Berlin office of U.S. News & World Report. John writes a letter (which is read) to Doug Wright, telling him of Charlotte. John changes into Doug, who is in Berlin with John and is talking into a tape recorder. The two men are heading toward Mahlsdorf, where Charlotte lives in East Berlin. On their way, they pass remnants of the Berlin wall, which has been torn down.

Doug morphs back into Charlotte. She holds some doll furniture in her hands and describes it. She continues to do the same with other antiques. She explains that after every disaster in Berlin, she would go through the rubble and save artifacts. Charlotte changes into Doug. He reads a letter that he has written to Charlotte. Doug is back in the United States but wants to revisit Charlotte and interview her if Charlotte will allow it. Charlotte writes back and agrees. Doug, now in East Berlin, asks John to translate for Charlotte his questions about her background. Charlotte waives the translations and begins to answer the questions directly in English.

She talks about her Tante Luise and how she encouraged Charlotte’s cross-dressing. Through Tante Luise, Charlotte learned about a book that states that everyone has various proportions of male and female elements in their bodies. Some people do not fit in the normally defined classifications, being neither fully male nor fully female. Tante Luise gave Charlotte the book and told her to read it. Charlotte talks about World War II, when Berlin was heavily bombarded by Russian splatter bombs. The German S.S. officers were looking for boys to recruit. One officer asks whether Charlotte is a girl or a boy. As Lothar (Charlotte’s given name), the audience hears the sixteen-year-old claim that he is a boy, but the officer decides Lothar is too young to shoot.

Charlotte says that her father was a Nazi and that he was brutal. In 1943, while Charlotte and her mother and siblings are living with Luise, Charlotte’s father visits them. He has a revolver and threatens to kill his wife and children. Luise counters with a gun of her own, which she fires. The father leaves. Luise declares that it is a shame she missed. Charlotte is sent back to Berlin to help renovate the family home to accommodate war refugees. While she is there, Charlotte is confronted by her father, who insists that Charlotte choose between him and her mother. When Charlotte chooses her mother, her father locks her in her room. Charlotte escapes and finds her father sleeping, whereupon she beats him to death. She is sentenced to four years in prison. Charlotte is in prison when the Russians bomb it. The prisoners are told by the guards to run, which Charlotte does. The Allied Forces are approaching Berlin. Russian soldiers are handing out free food.

Doug begins another visit with Charlotte. He follows her down a series of steps that opens up to what looks like an old-fashioned tavern. Charlotte describes the tavern and tells Doug how she bought all the furniture and brought all the flooring and walls over to her house to save the tavern from being destroyed by the Nazis. The Berlin tavern, since the time of Emperor Wilhelm II, had been a favorite hangout for homosexuals and transvestites. Once the Berlin wall was constructed, homosexuals and transvestites in East Berlin had no place to gather. So Charlotte secretly opened the tavern, which was then in her basement, as a place of entertainment. Charlotte painted the windows black to keep the Stasi (Berlin secret police) from spying on them. Doug interjects the fact that when the Berlin wall fell, Charlotte had the only cabaret in all of East Germany, which she ran for almost thirty years.

The Cultural Minister of Berlin appears and gives Charlotte a medal for the work she has done in preserving historical pieces. Charlotte is thrilled not just for the honor but also at having the ceremony broadcast on national television, thus demonstrating to all of Germany that even a transvestite can work. Doug asks Charlotte what it was like to visit West Berlin after so many years of living behind the Berlin wall. Charlotte then proceeds to read from a Berlin travel guide. She mentions several bars, cafés, and bookstores that cater to homosexuals and transvestites. When she is done, Doug asks her about her reputed collaboration with the Stasi. Charlotte describes how the Stasi came to her. The Stasi insisted, Charlotte says, that she write a statement, which they dictated to her and made her sign. The signed statement confirms that Charlotte willingly agreed to work with the Stasi. She would become their spy.

Doug tries to get further details from Charlotte about why she agreed to spy. Charlotte offers little, other than to relate what Tante Luise used to tell her. In essence, Luise advised that Charlotte should do whatever was necessary to survive. John speaks next. He tells Doug that the German press has gotten hold of Charlotte’s Stasi file, which confirms that she was definitely an informant. The file also reveals that Charlotte informed on one of her friends, who was subsequently sent to prison.

The act opens with the character Alfred Kirschner. He is reading a letter he has written to Charlotte. Kirschner is in prison for having sold antique clocks to American soldiers. He also relates some of his experiences in jail. He thanks Charlotte for encouraging him to not give up.

Doug asks questions about Charlotte’s Stasi file. He is confused and asks Charlotte to straighten out some of the details. Charlotte begins to tell the story of her relationship with Alfred, how they met and how they worked together to sell the old clocks. When Kirschner fears that the Stasi knows what he is doing, he stores the clocks at Charlotte’s house. Kirschner tells Charlotte to deny having any connection with him, which is what Charlotte does. When the Stasi come, Charlotte tells them the clocks belong to Kirschner, and they arrest him.

Charlotte then acts out one of her visits to Kirschner while he is in jail, claiming, to the guards, that she is his wife. Charlotte explains that Kirschner named her in his will. After his release, Charlotte helps Kirschner find a place to live in a nursing home. The Nazis have taken everything from his home. He dies later, leaving Charlotte only his bills.

John and Doug briefly discuss Charlotte’s Stasi file. A Stasi agent appears and reads items from the file itself, which refute Charlotte’s claims. The file states that Charlotte informed on Kirschner to the Stasi over a period of at least five months. This information helped the Stasi make their arrest of Kirschner. Doug takes the file to Charlotte to confront her, but Charlotte evades all his questions. Voices from an invisible loudspeaker can be heard. Politicians and other citizens are discussing whether her medal of honor should be taken away from Charlotte now that the news of her being an informant has been made public. Some people find it disgraceful; others say the whole discussion is meaningless, since many people informed on others during the Nazi era.

Ziggy Fluss, a talk-show host, interviews Charlotte, calling her “Trannie Granny.” He asks whether the rumors are true that she is moving to Sweden. Charlotte confirms this. She says that she is leaving because of the violence in Berlin. She recounts how her museum was vandalized by a group of neo-Nazis. About thirty of them scaled the wall of her backyard and terrorized her guests. A neo-Nazi talks: “Hitler forgot to shove you in an oven in Sachsenhausen!” Charlotte returns to her narration of the event, telling Ziggy that she attempted to defend herself by swinging an ax. As she explains this, she tells Ziggy that she shouted at one of the intruders: “I have met you before! When I was sixteen years old!” The police came, she says, but no one was arrested.

Charlotte talks about the atmosphere in East Berlin. She claims that anti-Semitism has returned, as has homophobia. Ziggy listens but then asks whether her leaving Germany might also have something to do with the reaction to her Stasi file. Charlotte deflects the question. As Charlotte leaves the studio, she is confronted by reporters. They ask her about her father’s death, the Stasi, and all the furniture she has. The reporters suggest that she has lied about her father, has collaborated with the Stasi, and was paid for her work with stolen furniture that was taken from people who were wrongfully forced from their homes. One reporter even suggests that Charlotte has lied about her sex, that she really is a woman. Again, Charlotte does not answer any question directly. She does make one solid statement in reference to whether she is a man or a woman. She says that her mother once told her that it was time to get married. Charlotte told her mother: “I am my own wife.”

A psychiatrist, Dieter Jorgensen, offers a psychiatric diagnosis of Charlotte, concluding that she is mentally ill, suffering from autism. “Her stories aren’t lies, per se,” Jorgensen states. “They’re self-medication.” Next follows a discussion between Doug and John. Doug confesses to John that he needs to believe in Charlotte, no matter what is in the Stasi files or what the media says. “I need to believe in her stories as much as she does!” Then Doug adds: “I need to believe that things like that are true. That they can happen in the world.” Doug is impressed just by Charlotte’s mere survival as a transvestite in a Nazi and Communist world. However, Doug admits that he does not have a clue how to put all the information that he has gathered about Charlotte into a play.

Doug turns on a tape. Charlotte is talking about the old furniture she has collected. She says that one must leave the furniture as it is, with all its marks and blemishes. And that one must show it “as is.” Doug relates that Charlotte did move to Sweden, where she lived for seven years. In April 2002, she decided to return to Berlin for a visit. While she was there, she died of a heart attack in the garden of her old home. Before she died, Charlotte sent an envelope to Doug that he received after her death. There is no letter inside, but rather an old photograph of Charlotte (Lothar) as a young boy, sitting between two tiger cubs.

The play ends with the sound of one of Doug’s tapes. On the tape, Charlotte is talking about Thomas Alva Edison and his invention of the phonograph. 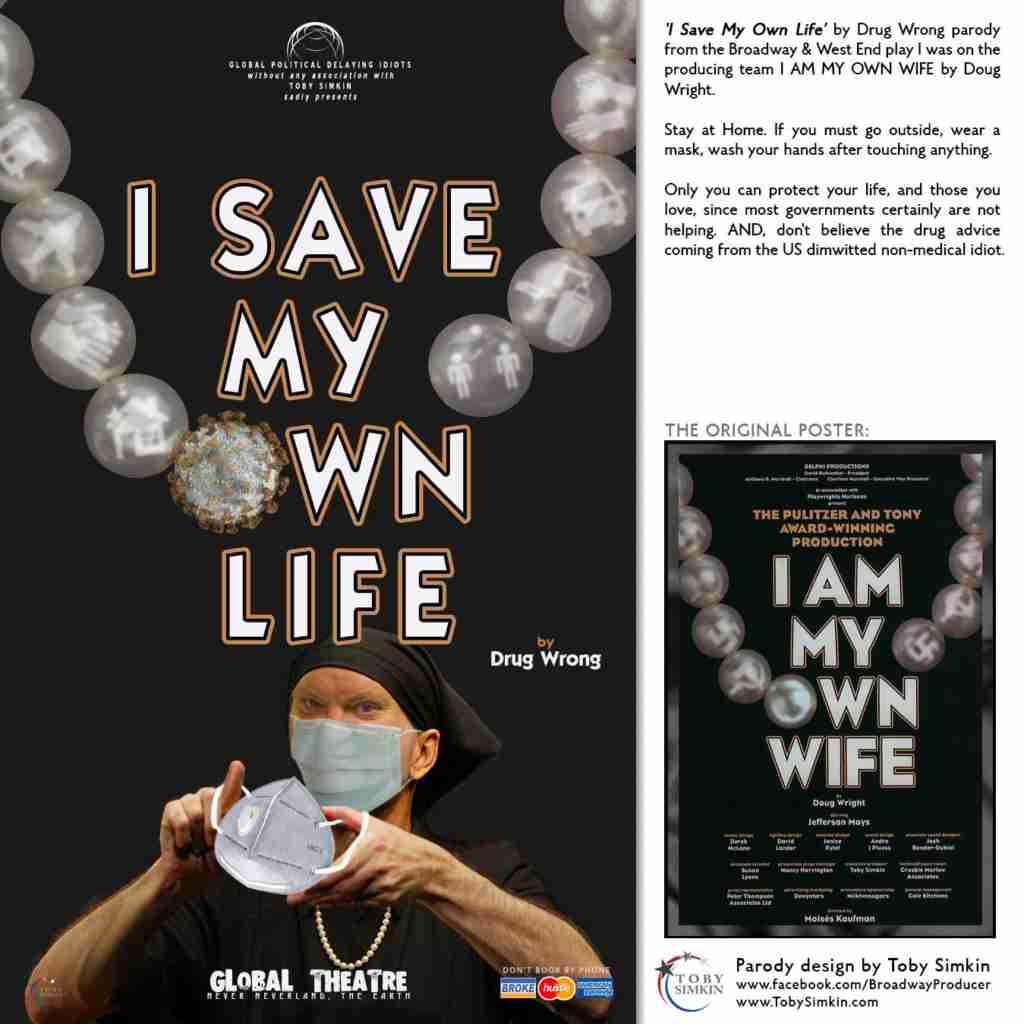