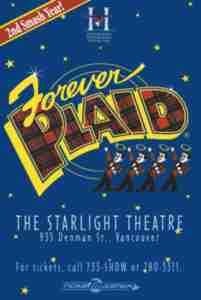 Forever Plaid by Stuart Ross at the Starlight Theatre, 935 Denman St., Vancouver opened on May 9, 1994 and enjoyed a 15 month run. Produced by Follows Latimer Productions from Toronto, Headquarters Entertainment Corporation (Tina Vanderheyden and Toby Simkin) presented locally including handing marketing, ticket sales and local liaison for Laurence Follows and Jeffrey Latimer who were Canadian pioneers in packing Off Broadway entertainment with dinners, hotels and events.

As CEO of Headquarters Entertainment Corporation (“HQE”) in Vancouver, British Columbia, Canada.  HQE managed group sales and marketing promotion for the majority of Broadway musical theatre tours on behalf of various presenters in the mid 1990’s.

Once upon a time, there were four guys (Sparky, Smudge, Jinx and Frankie) who discovered that they shared a love for music and then got together to become their idols – The Four Freshman, The Hi-Lo’s and The Crew Cuts. Rehearsing in the basement of Smudge’s family’s plumbing supply company, they became “Forever Plaid“. On the way to their first big gig, the “Plaids” are broadsided by a school bus and killed instantly. It is at the moment when their careers and lives end that the story of Forever Plaid begins….

Singing nostalgic pop hits of the 1950s in close harmony, squabbling boyishly over the smallest intonations and executing their charmingly outlandish choreography with overzealous precision.