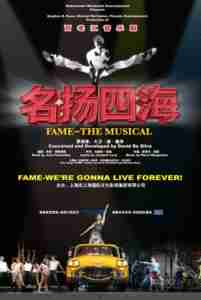 Although billed as “China Advisor” in the program put together a long time before the tour in New York, I was brought onboard the project a couple of weekends before commencement, and actually supervised and managed the entire China tour of FAME including routing (and re-routing), China staffing, presenter re-negotiation, marketing, company management, payroll, money collection, trucking, sets (and some costumes) refurb, physical production logistics, and was hands-on with the company for the entire tour.