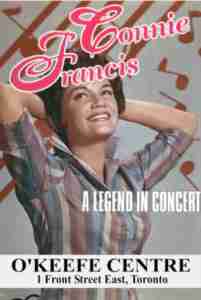 Production Manager for the Toronto engagement of the Connie Francis concert tour at the O’Keefe Centre for the Performing Arts in about 1991.

I was hired by then General Manager Marty Onrot specifically to manage her technical rider needs. Sold out audiences waited over 45 minutes for Ms. Francis to appear on stage, while more sequins were added to her leg cast.   You get the picture.

Located on 2.5 acres on Front Street between Yonge and Scott streets, the centre was built in 1960 at a cost of $12 million and was owned until 1968 by the O’Keefe Brewing Co. In 1968 ownership was transferred to Metropolitan Toronto; in 1996 the facility was renamed the Hummingbird Centre after its sponsor, Hummingbird Communications. It became the Sony Centre for the Performing Arts in 2007.

A modernist design, the fan-shaped theatre was built to seat more than 3,200 people on two levels facing an 18 metre wide proscenium. Though intended as a multi-purpose entertainment centre for opera, ballet, drama, and touring productions, the theatre’s size suited it primarily for large-scale productions.