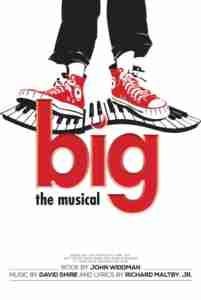 BIG with book by John Weidman, music by David Shire and lyrics by Richard Maltby, Jr. opened on Broadway on April 28, 1996 and played through October 13, 1996 for 22 previews and 193 performances at the Shubert Theatre.   Based on the Motion Picture “Big” a film by 20th Century Fox written by Gary Ross and Anne Spielberg.