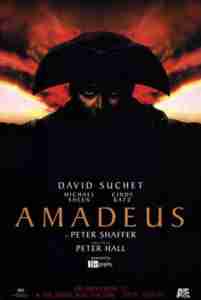 AMADEUS by Peter Shaffer opened December 15, 1999 and closed May 14, 2000 at the Music Box Theatre on Broadway after 10 Previews and 173 Performances.

The play explored the rivalry between Wolfgang Amadeus Mozart and Antonio Salieri, the court composer for the Emperor of Austria in the late eighteen century.

Amadeus begins in 1823 on the day that the elderly Salieri believes will be his last. Once a composer in the Austrian court of Emperor Joseph ll, his musical compositions have now been branded as mediocre and he is all but forgotten. Addressing the audience as “Ghosts of the Future,” he narrates and reenacts his relationship to Mozart. Many years earlier, Salieri recognized the genius of the young Mozart, who arrives at the court as a famous musical prodigy. Envy burns in the once pious Salieri, who renounces God and sets out to completely destroy his rival. 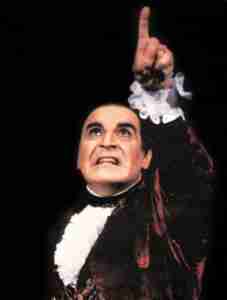 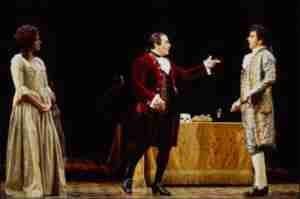 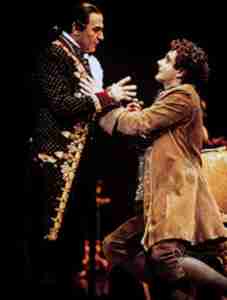 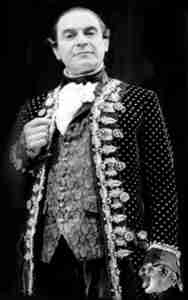 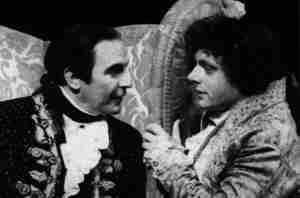 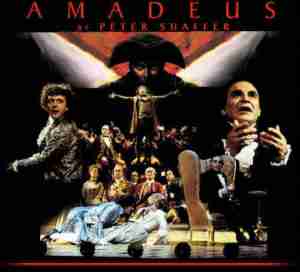 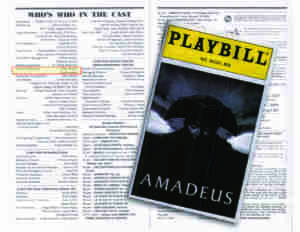 Beginning in the streets of Vienna in 1823 where rumors are flying that old man Salieri (once the famed director of the Italian opera and a favorite of Emperor Joseph II) has confessed to murdering Wolfgang Amadeus Mozart. Salieri appears in his room and tells us, the audience, that he indeed poisoned Mozart, vowing to tell us the whole story.

With that, we race backward in time to 1781, right before Mozart and Salieri meet. A young Salieri is a devout Catholic who has vowed to dedicate his life to composing music in the name of God. He is a favorite of the Royal Court and feels stable in his job and reputation until he hears the name Wolfgang Amadeus Mozart.

Mozart is on everyone’s minds and lips around Vienna, and Salieri becomes anxious to meet this young composer who has been known as a musical genius since childhood. Salieri finally meets this acclaimed Mozart and, to his horror, Mozart turns out to be a perverted, immature, vulgar young man. However, his music is indeed the thing of myths…its genius pierces through to the very soul of Salieri, who can’t understand how this petulant young man received the musical gift that he has been working towards his whole life.

Right then and there, Salieri swears off God and religion and decides to dedicate himself, instead, to ruining Mozart’s career.

Along the way, he not only ruins Mozart’s career, but also his life, all while hiding behind a mask of friendliness and concern for the young artist.

We watch Salieri poison Mozart’s reputation which eventually leads to his destruction and death.

A highly fictionalized account of the relationship between these two real life composers, Peter Shaffer’s Amadeus takes us on a wild ride through the trials and tribulations of genius, jealousy and revenge.

Requiem (death mass)
A musical composition performed at a funeral to honor the deceased. Salieri commissions Mozart to write a Requiem, and he plans on performing this Requiem at Mozart’s funeral after killing Mozart.
https://www.youtube.com/watch?v=Zi8vJ_lMxQI

Abduction from the Seraglio (1782)
An opera with dialogue in German. The plot concerns the hero Belmonte’s attempts to rescue his love Konstanze from the seraglio (harem) of the Pasha Selim.
https://www.youtube.com/watch?v=HAPYT7Lk2bc

Don Giovanni (1787)
An opera in Italian with a libretto by Lorenzo Da Ponte. A blend of comedy, supernatural, and melodrama, it is based on the Spanish tales of the legendary lover, Don Juan.
https://www.youtube.com/watch?v=iJnJjpMdT3Y

Così Fan Tutti (1790)
A comic opera in Italian with a libretto by Lorenzo Da Ponte. The title is sometimes rendered in English as “Women are Like That.” There is some evidence that Salieri also had attempted to set the libretto to music, but abandoned it.
https://www.youtube.com/watch?v=xBXy9N3Frkk

The Marriage of Figaro (1786)
A comic opera in Italian with a libretto by Lorenzo Da Ponte based on a play by Pierre Beaumarchais. The plot concerns servants Figaro and Susanna foiling Count Almaviva’s attempts to seduce Susanna. In Amadeus, Mozart transforms Salieri’s welcome march into the aria “Non piu andrai” from this opera.
https://www.youtube.com/watch?v=e1-FKyOTvto

The Magic Flute (1791)
An opera in German, in the singspiel style with both singing and dialogue. It is a fantasy in which hero Prince Tamino, along with comic sidekick Papageno undergoes a series of tests to win the hand of Pamina. They must oppose the evil Queen of the Night, Pamina’s mother. The Magic Flute uses veiled references to rites of the Freemasons. “The Queen of the Night’s” aria is one of the world’s most familiar pieces of vocal music.
https://www.youtube.com/watch?v=YuBeBjqKSGQ

For Amadeus, Peter Shaffer commissioned a march for Salieri to play as a welcome for Mozart, who creates a now-famous variation on it “Non piu andrai” Here’s a quick comparison of the two:
https://www.youtube.com/watch?v=DGCcVnbzv8U

17 years earlier, in 1982, I was ASM for the Queensland Theatre Company production, a spectacular production. 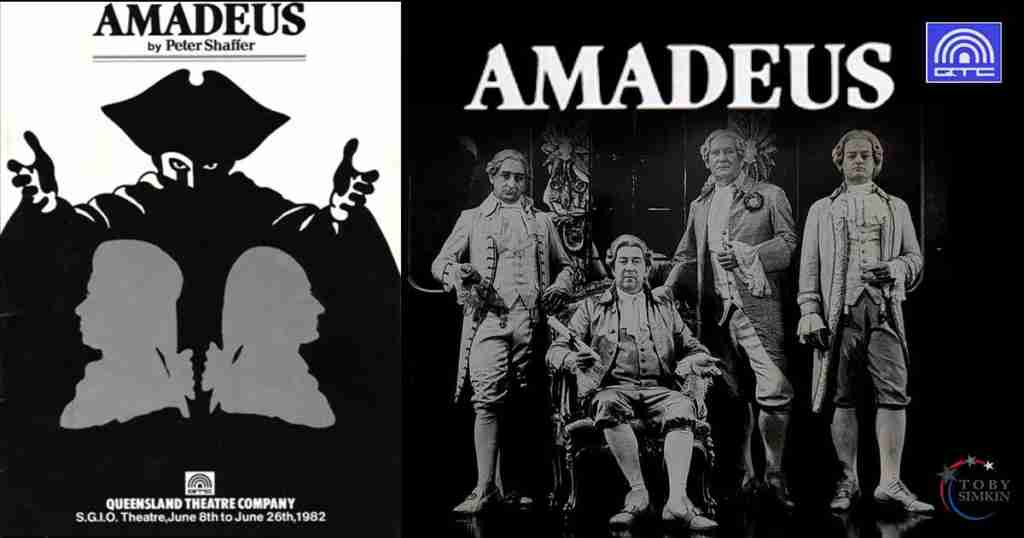 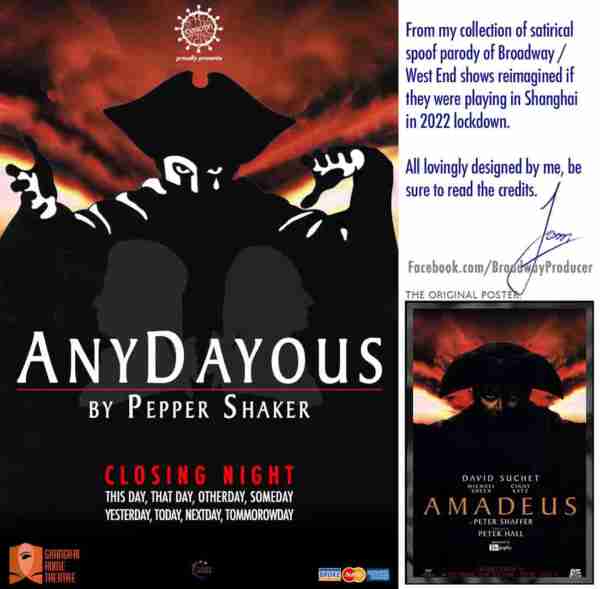 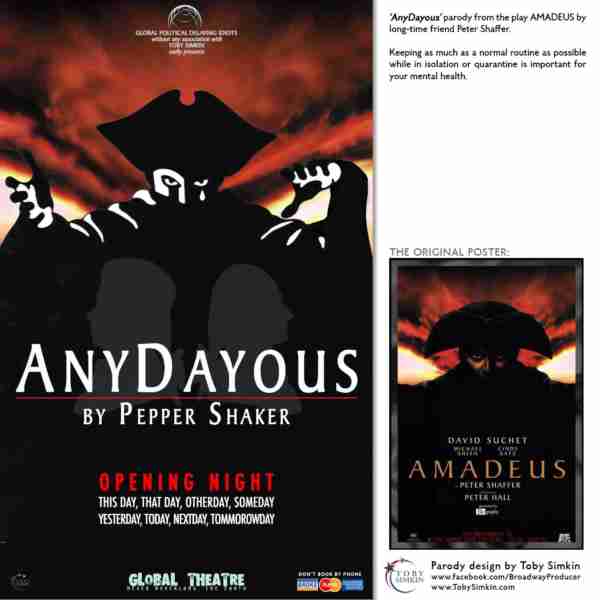