the majority of Canadians live south of Seattle

The majority of the population of the USA’s northern neighbor actually live south of a major US city. While the 49th parallel is often thought of as the border between the US and Canada, around 72% of Canadians live below it, and Seattle, WA.  Canada’s two largest cities, Toronto and Montreal along with Ottawa (it’s capital) are well south of Seattle.

The popular myth that the border between USA and Canada runs along the 49th parallel from sea to rolling sea is bunk. 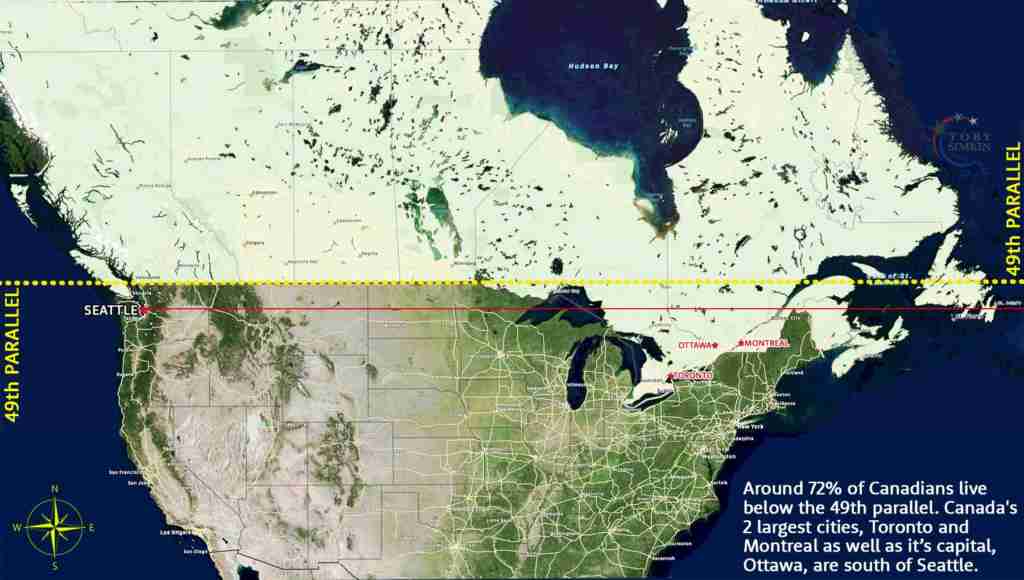 Look at a real map — one that shows degrees of latitude north from the equator. About 72 percent of the roughly 35 million supposedly Great White North-dwelling Canucks live well south of Seattle, far below the 49th parallel in the Great Lakes region.

Of the Canadian provinces, only Alberta, Saskatchewan and Manitoba lie entirely north of the 49th parallel; even Victoria, the capital of British Columbia, lies far south of many from Washington state. All three maritime provinces on Canada’s east coast lie entirely south too, as does more than half of Labrador and Newfoundland.

Many USA residents perception of the Canada/USA border is that its snow skiing season all year round.